Modulation of KCNQ2/3 Channels by Retigabine

Modulation of KCNQ2/3 potassium channels by the novel anticonvulsant retigabine

Retigabine is a novel anticonvulsant with an unknown mechanism of action. It has recently been reported that retigabine modulates a potassium channel current in nerve growth factor-differentiated PC12 cells (Rundfeldt, 1999), however, to date the molecular correlate of this current has not been identified. In the present study we have examined the effects of retigabine on recombinant human KCNQ2 and KCNQ3 potassium channels, expressed either alone or in combination inXenopus oocytes. Application of 10 μM retigabine to oocytes expressing the KCNQ2/3 heteromeric channel shifted both the activation threshold and voltage for half-activation by approximately 20 mV in the hyperpolarizing direction, leading to an increase in current amplitude at test potentials between −80 mV and +20 mV. Retigabine also had a marked effect on KCNQ current kinetics, increasing the rate of channel activation but slowing deactivation at a given test potential. Similar effects of retigabine were observed in oocytes expressing KCNQ2 alone, suggesting that KCNQ2 may be the molecular target of retigabine. Membrane potential recordings in oocytes expressing the KCNQ2/3 heteromeric channel showed that application of retigabine leads to a concentration-dependent hyperpolarization of the oocyte, from a resting potential of −63 mV under control conditions to −85 mV in the presence of 100 μM retigabine (IC50 = 5.2 μM). In control experiments retigabine had no effect on either resting membrane potential or endogenous oocyte membrane currents. In conclusion, we have shown that retigabine acts as a KCNQ potassium channel opener. Because the heteromeric KCNQ2/3 channel has recently been reported to underlie the M-current, it is likely that M-current modulation can explain the anticonvulsant actions of retigabine in animal models of epilepsy. 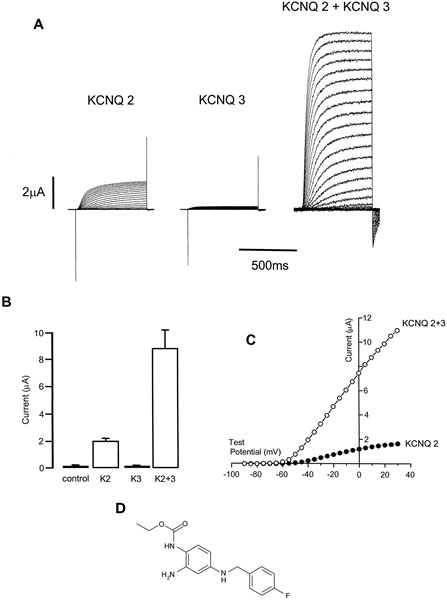 Retigabine (D-23129;N-(2-amino-4-(4-fluorobenzylamino)-phenyl) carbamic acid ethyl ester) (see Fig. 1D) is a novel anticonvulsant compound that is currently undergoing clinical trials for the treatment of epilepsy (Bialer et al., 1999). Experiments in vivo have shown that retigabine is effective in a broad range of epilepsy and seizure models (Tober et al., 1994b; Rostock et al., 1996) as well as in genetic models of epilepsy (Tober et al., 1994a, 1996;Dailey et al., 1995). Retigabine has been reported to act through several mechanisms, which may underlie its anticonvulsant activity: first, retigabine has been shown to augment GABA-activated currents in cultured neuronal cells (Rundfeldt et al., 1995), possibly through a stimulatory effect on GABA synthesis (Kapetanovic et al., 1995). Second, retigabine blocks sodium channels at high concentrations (Rundfeldt et al., 1995). Finally, retigabine has been shown to activate a potassium current in nerve growth factor-treated PC12 cells and in rat cortical neurons (Rundfeldt, 1999). Preliminary pharmacological characterization showed that the retigabine-activated potassium current is blocked by Ba2+, but is unaffected by high concentrations of 4-aminopyridine (10 mM), a blocker of Kv1, Kv2 and Kv3 channels; and is only weakly inhibited by tetraethylammonium (TEA) (62% at 10 mM). Retigabine-activated currents were recorded at a holding potential of −40 mV, suggesting that retigabine acts on a channel that is activated, but not inactivated, at this membrane potential. On review of these data, we hypothesized that retigabine may be an activator of the M-current, which is a noninactivating potassium current characterized by a relatively negative activation threshold, and which is blocked by Ba2+ and TEA (approximate IC50 = 10 mM), but is insensitive to 4-aminopyridine (Selyanko et al., 1999).

The M-current is a low threshold, slowly activating potassium conductance that was first recorded in rat sympathetic ganglia (Brown and Adams, 1980) and has subsequently been identified in a variety of neuronal and nonneuronal cells. It was reported in a recent publication that a combination of two cloned potassium channels―KCNQ2 and KCNQ3―showed virtually identical biophysical and pharmacological properties to M-current following coexpression in Xenopusoocytes (Wang et al., 1998). Similarities between the KCNQ2/KCNQ3 heteromeric channel and M-current include biophysical properties, inhibition of KCNQ2/3 current following muscarinic receptor activation, sensitivity to TEA and Ba2+, and pharmacological block by the selective compound linopirdine (Wang et al., 1998). A novel member of the KCNQ family, KCNQ4, has recently been cloned, which shares several biophysical and pharmacological properties of other family members, including heteromerization with KCNQ3 (Kubisch et al., 1999) and inhibition via M1 muscarinic acetylcholine receptors (Selyanko et al., 2000). It is therefore likely that KCNQ3/4 is responsible for M-current in at least some neuronal tissues.

In the present study, we have examined the effects of retigabine on KCNQ2 and KCNQ3 potassium channels recombinantly expressed inXenopus oocytes and Chinese hamster ovary (CHO) cells. Our data demonstrate that retigabine is a potent KCNQ channel opener. These results provide a molecular mechanism that can explain the anticonvulsant actions of retigabine in in vivo animal models